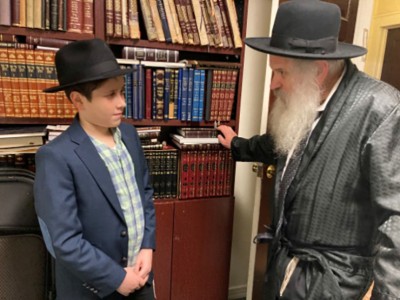 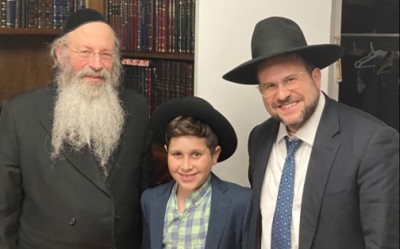 Our son Avi became a Bar Mitzvah on Thursday. Unfortunately, my father-in-law was not feeling well enough to attend the Shabbat event, so Avi and I went to visit him in Lakewood on Thursday afternoon.

Once we were going, we made it into an even more inspirational and meaningful trip. On the way, we stopped off at the cemetery where my father’s parents are buried in Woodbridge, New Jersey. It was particularly meaningful for Avi to daven at the kever of his namesake, the first Avraham Yosef Staum.

From there, we went to the cemetery in Lakewood, where all four of my wife’s grandparents are buried. Avi and I davened there, as well.

I was then able to arrange a meeting with two of the Lakewood Roshei Yeshiva – Rav Malkiel Kotler and Rav Dovid Schustal. During our respective brief meetings, they were both so warm and engaging, and it was a beautiful moment for us.

After they gave Avi a Bracha, I asked each of them to share a thought that Avi and I could reflect upon and through which we could remember the special meeting.

Rav Dovid Schustal noted that, although being a ben Torah entails bearing a tremendous yoke, that yoke doesn’t breed sadness. In fact, it’s the opposite; the more one accepts that yoke, the more simcha he feels. The Rosh Yeshiva pointed in the direction of Beth Medrash Govoha, the famous Lakewood yeshiva, just a few doors away from his house. “If you walk into the yeshiva now, in the late afternoon, you’ll see thousands of men who have a great yoke on their shoulders. Do they look unhappy?” We had actually walked through the yeshiva just minutes before. Avi agreed that the packed batei midrash were full of energy and aliveness. Rav Schustal added that the greatest simcha is to be found in connecting with Hashem. The more one accepts that yoke, the happier he will feel.

Rav Malkiel asked Avi if he was nervous about becoming a bar mitzvah? Wasn’t it concerning to know that from then on, he would be responsible for all his actions? Avi nodded that he was wondering the same thing.

As I reflected on Rav Malkiel’s thought, I realized that it relates to all facets in life. Whenever we are thrust into new situations – for good or for better – we can feel overwhelmed. We suddenly find ourselves having major responsibilities that we did not have before, and we may feel intimidated and fearful. A person must know that Hashem gives a person strength to face all new challenges, even when it may not feel that way at first.

Of course, the most meaningful part of our night was going to visit my father-in-law. “The crown of elders is their children’s children.” We came to celebrate the growth and luster of another diamond in the crown of a proud grandfather. It was hard for us that he couldn’t join the actual simchah, but we look forward to being able to celebrate simchos in the future.

We hope that Avi will utilize the newfound siyata diShmaya as he continues to climb the rungs of spiritual growth.