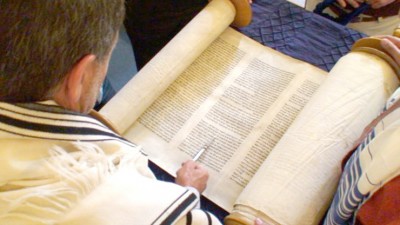 Last week on Simchat Torah, I was asked to lain a few ‘rounds’ of Parshas V’zot Haberacha, to help ensure that every man and boy received an aliyah to the Torah. I was still laining when my oldest son Shalom, received his aliyah. After he masterfully said the beracha I began laining the aliyah.

Being that our family are Leviim, our oldest, Shalom, received the aliyah that begins with the words “Ul’Levi Amar”. It contains the blessing Moshe Rabbeinu conveyed to his own tribe, where he blessed the Levites with the priesthood of the nation. Moshe explained that they were worthy of that blessing because when he rallied the nation to avenge the honor of G-d after the sin of the golden calf it was his fellow Levites who heeded his call. Moshe lauded the Levites for ignoring the fact that they may have been obliged to strike at their own maternal grandfathers or uncles who had been involved in the egregious sin. The fact that their love of G-d superseded their natural love for their own flesh and blood made them worthy of the loftiest responsibility of performing the holy Service in
the Mishkan.

As I read those words with my son standing next to me following along it struck me. I love my son more than life itself and I hope he feels the same for me. But if I am worthy to educate him properly, his love for me will not be above all else. His love for Hashem will be even greater.

The first nationally distributed feature film that included dialogue sequences as well as music and sound effects produced by Hollywood was ‘The Jazz Singer’, starring Al Jolson (1927). The protagonist of the movie is a Jewish cantor who falls for an Italian gentile girl. At first he is banned from the Temple. But the story ends with the protagonist leading the Kol Nidrei services with his mother and gentile wife looking on from the balcony approvingly.

That message of Jewish-dominated Hollywood has not changed in the decades since. Hollywood espouses that ‘love’ must champion all else. The fact that they have replaced ‘love’ with fleeting romance and cheap uncommitted narcissistic relationships is largely unrecognized by our society.

The truth is that we agree that love must champion all else – albeit the love for G-d and His Torah. There is no greater value that we wish we can inculcate in our children. Life is the most valuable commodity we have, and every moment of it is precious. But what makes life valuable? Mesillas Yesharim explains that it is only through living a proper life in this world that one can enter and merit the bliss of the next world.

The greatness of life is measured by how much value one infuses into his life and how one chooses to utilize the great gift endowed to him. When one possesses love and appreciation for Torah and its timeless values than his entire life has meaning.