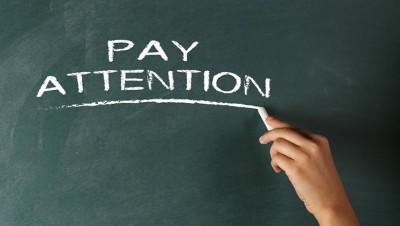 Before Shabbat this week, I asked our son Shalom if he turned off his alarm clock so that it wouldn’t go off in the morning. He assured me that he did. Somehow the alarm clock sprang to life anyway and at 6:30 a.m. Shabbat morning our upstairs was filled with the relentless chiming of his alarm clock. At about 7 a.m. when I headed downstairs, I noticed a most interesting sight: Our daughters were wide awake while our two older boys were sound asleep, oblivious to the obnoxious buzzing of their alarm clock. It was obvious that because the alarm clock served to signal to the boys that it was time for them to get out of bed to get ready for school, they had trained themselves to not to hear it. To the girls however, it meant nothing more than that they were lucky to have more time to stay in bed. Therefore, the girls had no aversion to getting up and taking advantage of some early time.

The human mind can accustom itself to anything. When I was spending a Shabbat in Lawrence a number of years ago, in the middle of the meal I heard the unmistakable deafening sound of a jumbo jet bearing down upon us. I was sure that it was about to land on the dining room table in the cholent. I instinctively ducked (as if that would help at all). To my astonishment my host continued the conversation as if nothing were going on. Because he lived next to the Kennedy airport, he had grown accustomed to the sounds of planes taking off and landing, and he hardly heard them.

The same was true when I was visiting a friend in Edison. Then too in the middle of the Shabbos meal I felt heaving pulsations and the unmistakable sound of a train bearing down the track. I was sure the New Jersey Transit was going to run right through his living room. But my host didn’t even acknowledge it.

When my parents first moved to Monsey in 1988, after living their entire lives in Manhattan, they couldn’t sleep at night because of the eerie quiet. Where was the honking trucks, shouts, and hullabaloo at 2 a.m.? The sound of crickets was unnerving to them. But not too long later when they returned to the Lower East Side to visit, they had a hard time sleeping with the windows open because of the noise.

Educational experts note that when adults yell, threaten, or lecture children, the children can tune out as soon as the adult begins talking, and no longer hear the content of the harangue. (From what I’ve heard from others) this can happen between spouses as well.  [Someone once noted that in the old Charlie Brown movies, their teacher always sounded unintelligible. The reason is because that is often how students hear their teachers – like a dreary endless blah of monologues.]

The Yom Tov of Shavuot gives us a brief, subtle yet poignant jolt that reminds us of the centrality of Torah in our lives. On Shavuot we read about the revelation of Sinai, amidst thunder and lightning, and the uninhibited display of G-d’s Power throughout the world.

In the daily grind we often forget about the thunder and lightning and the excitement of Torah. It becomes just another part of our day, and we forget that its message is eternal and all encompassing. On Shavuot we remind ourselves “It is our life and the length of our days, and in it we will engage day and night.”

On Shavuot an internal alarm is buzzing. It’s up to us to decide if we will heed its call.