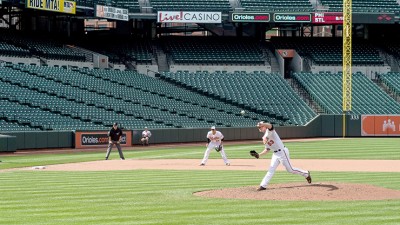 Be strong, despondent baseball fans! All hope is not lost for the beleaguered 2020 baseball season.

While Major League Baseball is still on hold indefinitely, halfway across the world the sounds of whizzing baseballs and the crack of the bat can be heard.

In South Korea, the Korean Baseball Organization (KBO) has begun its preseason, in the hope that it will be able to begin its regular season in a few weeks.

But there will be nothing regular about the regular season. For now, the games will be played in front of empty seats in an otherwise empty stadium.

During the games, the stadium is eerily quiet and boring. Dan Straily, an American-born pitcher with the Lotte Giants of the KBO, quipped, “I had to ask people in the front office to get some music between innings, to somehow try to get a little energy [in the stadium].”

Straily noted that without fans it’s much harder to generate energy and motivation.

“Even if you’re on the other side and the fans are yelling at you, you just feel the energy. Somewhere deep down, it adds adrenaline to you and you feed off of that.”

The KBO’S new COVID-19 rules include that players must have their temperatures checked twice a day. Everyone not in a baseball uniform, including umpires and athletic trainers, must wear face masks and gloves. If a player shows symptoms, he’ll be immediately quarantined and they’ll close the stadium where he played his most recent game; if he tests positive for the virus, they will immediately use contact tracing to determine who else needs to be quarantined for two weeks.

But perhaps the most challenging rule for players is that, for the time being, they are not allowed to spit! Players chewing and spitting all over the clubhouse and field at baseball games is as much a pastime as the game itself. Imposed civility on the field at baseball games? What’s next? Hitters apologizing to the pitcher if they hit a homerun off them, and pitchers apologizing to hitters when they strike them out?

Truthfully, my bigger concern, even more than spitless baseball, is if they can really play a game without people walking around the stands screaming “beyaeh heeyah (beer here)!”

In his commentary at the conclusion of Parshas Bo (Sh’mos 13:16), the Ramban explains that the ultimate objective of all mitzvos is to help us develop our faith in G-d and acknowledge that He created us. This is the objective of creation itself. “For we have no other explanation for the first creation, and the most High has no desire for the earthbound creatures except this: that man should know and acknowledge to his G-d that G-d created him.”

The Ramban then adds that this is the reason why we have shuls in which we pray together: “that people have a place where they can gather and acknowledge... where they can publicize this and declare before Him, “We are your creations!”

Prayer is by definition a medium that helps foster faith and connectivity. The effect of personal prayer in seclusion is incomparable to prayer with a congregation in a shul when, in unity, we reinforce within each other our collective mission to accept G-d’s Will.

The Sefer HaChinuch (mitzvah 331) notes that whenever something is performed with multitudes, it builds momentum and excitement. “For nothing strengthens the hearts of men as much as the actions of the masses.” Even when a person’s resolve is weak and flimsy, he can become swept away by the frenzied energy of the masses, and that itself can awaken him from his lethargy and infuse him with energy.

During these last few weeks, when we have been forced to daven outside of our beloved shuls and without a minyan, G-d undoubtedly must have tremendous nachas from the tenacious dedication of His holy people who continue to serve Him and pray to Him in any way possible. But for us, being unable to daven together is extremely painful and challenging.

I must admit that I never realized how much chizuk one gains just by setting foot in a shul, the holy room always waiting for its adherents to begin praying within it. I never realized the infusion of spiritual energy one feels when davening together even on a weeknight, and even when it was inconvenient to schlep out there. We hope that soon we will be able to return to our shuls and to participate in communal prayer with renewed appreciation and renewed reverence.