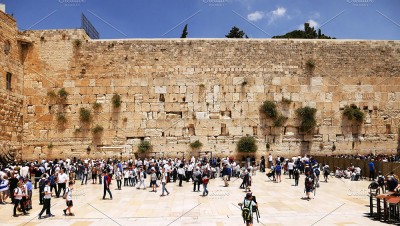 In Parshat Eikev, Moshe Rabbenu recalls how after he spent forty days in the heavens receiving the Torah, he came down and saw the people worshipping the golden calf. He then later returned to the heavens to plead that Hashem forgive Israel for their sin.

The work Amudeha Shiba brings an obscure Midrashic passage that connects Moshe’s pleas to Hashem after the sin of the golden calf with the story of Eliyahu Hanavi. As we read in the Book of Melachim, Eliyahu was forced to flee from Izebel, the queen of Israel who sought to kill him, and he came to Sinai. There he was provided with some food, which, the verse states, sustained him for forty days and forty nights. Hashem then appeared to Eliyahu, and he reported to Hashem that Am Yisrael had abandoned His covenant and worshipped idols. The Midrash interprets these verses to mean that after Eliyahu ate, he was shown a vision of Moshe Rabbeinu spending forty days and forty nights atop Mount Sinai pleading with Hashem for forgiveness on behalf of the Jewish People. Hashem sharply chastised Eliyahu for reporting negatively to Hashem about Am Yisrael, instead of advocating on their behalf, as Moshe had done.

To explain this Midrash, the Amudeha Shiba cites a famous passage in a different Midrashic source which teaches that when Hashem wanted to create Adam, various groups of angels protested. One such group was the group which represented “Emet” (truth), and who argued that human beings should not be created, because they are dishonest. To silence their protest, the Midrash relates, Hashem took hold of “Emet” and “threw them to the ground.” One commentator explains this to mean that he sent the angels of this group down to earth, where they would derive benefit from human beings and thus come to appreciate the greatness of people, instead of objecting to their having been created. One of these angels was Eliyahu Hanavi. He was originally an angel, part of the “Emet” group, and he was sent to earth for the purpose of being shown the positive qualities of human beings.

This group of angels also consisted of the three angels who visited Abraham Abinu, who served them a lavish meal. They, too, had argued against the creation of man, and so they were sent to earth where they would benefit from the hospitality of a human being, and thus appreciate them. The effects of these angels’ visit to Abraham were felt years later, when Moshe went to the heavens to receive the Torah. The Midrash relates that the angels initially protested, arguing that the Torah belongs in the sublime, pure domain of the heavens, and should not be entrusted to frail human beings. Hashem responded by making Moshe Rabeinu appear like Abraham Avinu, and then reminding the angels of how they were once fed and cared for by a human being. They were sent to the world to see the greatness of human beings, and acknowledge the value of their being created and that they deserved Hashem’s Torah. And because of this experience, they were compelled to stop protesting the decision to give Beneh Yisrael the Torah.

With this background, the Amudeha Shiba proceeds to suggest a novel reading of the Midrash’s interpretation of the story of Eliyahu. He explained that Eliyahu did not actually survive for forty days from the nourishment provided by the small morsel of food he was given. This description actually refers to Moshe Rabeinu. Hashem showed Eliyahu a vision of Moshe’s forty-day stay in the heavens which was “sustained” by the eating of the three angels who visited Abraham. Moshe was able to receive the Torah because years earlier, Hashem had sent three angels to Abraham’s tent, where they were fed, proving to them the greatness of the human being, and why the Jewish People deserved to receive the Torah. Eliyahu, too, was sent to this world to receive benefit from people and recognize their greatness – but he did not learn the lesson. Instead of defending and advocating for the Jewish Nation, he instead complained about them to the Almighty.

The role of a Jewish leader – and, in a sense, of each one of us – is to advocate for the people, not to complain about them. Of course, at the appropriate time and in the appropriate manner, a leader is required to point out to the people their mistakes so they will improve. But in speaking to Hashem, the leader’s obligation is to pray on the people’s behalf, to emphasize only their virtues, their merits, their good deeds and their good qualities. There are enough “prosecuting” angels in the heavens who argue against the Jewish Nation before the Heavenly Tribunal. They don’t need our help. Our focus must instead be directed towards all that is beautiful about the Jewish People, and pleading to Hashem to bless His beloved nation and shower them all with joy, success and prosperity.