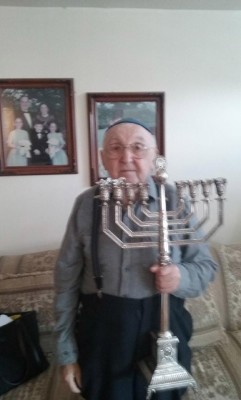 Sol Goldberg, a Sheepshead Bay resident, is a client of Caring Professionals under its special survivor program. Caring Professionals provides many hours of home care to Sol and his wife through funding provided by the Conference on Jewish Material Claims against Germany through the Jewish Community Council of Greater Coney Island which provides many services to the Goldbergs. These services allow them to stay home in comfort and independence. I met him at a recent Thanksgiving event and he was willing to share his compelling story with our readers.

Shlomo Zalman as he was called, was born into a family of Gerrer chassidim in the town of Djunsko Volo, Poland. All the towns Jews were devout yidden. His grandfather owned a wholesale grocery business and three generations lived comfortably in apartments above the retail store in the front and the wholesale division in the back.

Two days after the invasion of Poland, on Sunday September 13, the Germans marched into Djunsko Volo. Although they only took 20 Jews at first, they destroyed the main town shul in the square and burned the sifrei torah. They appropriated fifty houses and took the Goldberg family home because it was spacious. They stomped on Sol’s tefillin when they came, perhaps suspecting that jewelry was hidden in the leather boxes. All four Goldberg families were relocated to an apartment in the town ghetto where each family had one room.

Before the war, Djunsko Volo’s mayor was a customer of the family business. He bought the chemicals for his leather business from them. When the Nazis came in, he made the Goldbergs the distributors of the biweekly potato rations for the Jews and gave them extra rations.

After Shavuos, when news of the impending liquidation of the ghetto spread, the Goldbergs dug a hole in the ground and hid two bags of silver items. There they remained throughout the war.

Sol, a 17-year-old, was sent to the Lodz ghetto where he performed forced labor in a factory that produced uniforms for German soldiers. From there he was deported to Auschwitz for several months. When the Russians came closer, he was sent on a death march to another camp.

After liberation, he returned to Djunsko Volo in July of 1945 with surviving friends. He sought his family but found no one. There he learned of the fate of his parents and sisters from a local non-Jew. They had been shot in a mass grave. He said a heartbroken kaddish and decided to move on.

There was no reason to stay. The local Poles had broken the windows of the lodging where they were staying and committed other acts of violence against the returning Jews who feared for their lives. Before leaving, Sol dug up his family treasures but could not take all the items with him; he would be traveling without papers. He took his mother’s silver pocketbook because it fit in his pocket. The rest he gave to his late brother-in-law’s relative who would bring them to a trusted Pole in nearby Lask.

Sol and his wife, a survivor from Vilna whom he met after the war, made their way to one displaced persons camp after another. They spent over six years in Fernwald before heading to America. “My grandson once asked me why I didn’t go to Israel. I was the sole survivor of my family. I couldn’t risk being killed in Israel during the wars and violence. I had an obligation to build a family that would continue our family’s name and traditions.”

The Goldbergs have two sons and have several grandchildren. They have resided in their Sheepshead Bay apartment for 43 years. Mama’s silver pocketbook hangs in a frame on the living room wall. There are some photos of his parents and siblings because wedding photos were sent to family members in Israel when his sister got married before the war.

In 1995, Sol heard that a delegation of American Jews planned to travel to Poland to deal with the government authorities in Lask. His fourth cousin was going along on the mission to prevent the erection of a building on the site of the cemetery in Lask. Sol asked his cousin to go to the woman to whom his family’s treasures were entrusted fifty years earlier to reclaim them on his behalf.

“‘I sold them to eat,’ she said. ‘This is the last piece.’” It was Zaide Leib Goldberg’s silver Chanukah menorah.  For Sol, the restoration of the menorah is a visible reminder of the survival of the Goldberg family of Djunsko Volo, Poland against all odds.

“I want people to know my story, the story of families destroyed by wicked people, the near destruction of our people. There is no explanation for what happened. But we need to remember.”