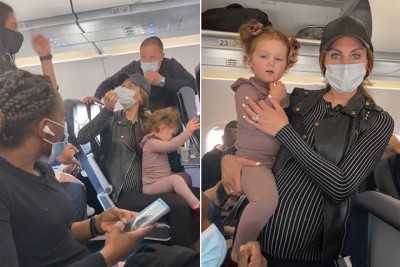 A year after the COVID-19 pandemic abruptly forced Jewish families to change their getaway plans in favor of staying home, kosher resorts and hotels have reopened with guidelines involving eating separately, sitting at a distance from other guests, and wearing masks at most indoor events. After a year of working and learning at home, the desire to travel meant that children had to be trained to remain in their seats and keep their masks on for the duration of the flight.

Any actual or perceived violation of COVID guidelines while in flight could reflect badly on Orthodox Jews, but what happened on Monday aboard a Spirit Airlines flight from Orlando to New York did not involve a man demanding a change in seating for tzniut (modesty) reasons, or a minyan demanding its right to daven standing. Such examples made their rounds online before the pandemic.

But in this situation, an overzealous employee argued that an unmasked girl sitting on her pregnant mother’s lap, while eating yogurt, was not in compliance with the rules and the family must leave the flight.

“A special needs child and a two-year-old,” Ari Eisenberg said in the videotaped exchange. “I am not going to leave until I understand what I did wrong. You can call your manager.” Other passengers defended the orthodox jewish parents, noting that the mask requirement was for passengers ages five and up.” Anyone else want to put a mask on my kid and see if it stays on?” the mother, Avital Eisenberg asked passengers on the flight. The parents tried various methods of convincing the child to wear a mask, including offering her a pink one instead of blue – but it wasn’t working.

“It’s not my choice. You have to take your stuff and get off,” the airline worker insisted, repeatedly saying the family was in “non-compliance with the mask policy.” “We’re done talking. The pilot wants you off, so you have to get off,” she said.

Avital continued to plead that “She’s a baby. She just turned 2 a month ago. She’s been trying to wear it.”

The father is heard telling the flight attendant that their other child is “special needs,” and that his wife is seven months pregnant, but none of this played a factor in the airline’s response to the situation.

The family was removed by police, and all passengers had to deplane, but they were then brought back, with the employee grounded for picking on the child. “My son missed his medication window,” Avital Eisenberg told Fox News. “Thank G-d, he didn’t have a seizure. He was sitting there in a soaking wet diaper because I couldn’t change him during the whole thing. My daughter is going crazy from all this. It was a terrible, terrible experience to go through, let alone someone with a special needs child.”

On the same day, on a JetBlue flight from Newark to Las Vegas, two Orthodox paramedics saved the life of an elderly passenger who fainted aboard the flight. Yeshiva World News described one of them as a former Queens Hatzolah volunteer. We know that many young professionals who live in Queens volunteer in the community as members of Hatzolah, Chaverim, and Shmira, among other exemplary organizations. It gives us pride to see that the skills that these volunteers gained in Queens have been applied in emergency situations wherever they now reside or travel.

Anti-Semitism often reappears in times of crisis when a minority group that is easily identifiable by their appearance becomes the target of unjustified enforcement based on stereotypes and negative news coverage. In the case of the Spirit Airlines flight, other passengers stood up for the Eisenberg family, noting that theirs was not the only unmasked child, and reminding the employees of the rules that exempted toddlers and disabled children from the mask requirement.

When individual employees are authorized to decide matters of COVID compliance, an associate can feel as empowered as a supervisor or a manager. Common sense would recognize that a family posing for a photo in front of Cinderella’s Castle at Walt Disney World should be permitted to remove their masks for a ten-second selfie.

Recognizing that not all employees can be trusted to use their best judgment in enforcing compliance among customers, the company issued a statement.

“You may temporarily remove your face covering while actively eating, drinking, or taking an outdoor photo, but you must be stationary and maintain appropriate physical distancing during this time.”

Perhaps some individuals have become so accustomed to wearing masks that they do even so while driving alone in their cars or walking on an empty street at night, but most Americans are reasonable about COVID safety while seeking a semblance of normal life. This includes going on a vacation and taking a maskless photo with smiles that will be treasured for years to come.