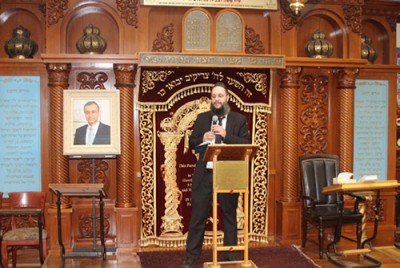 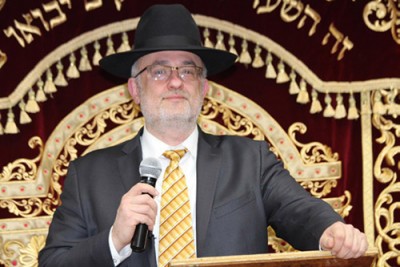 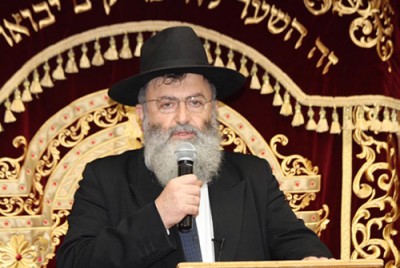 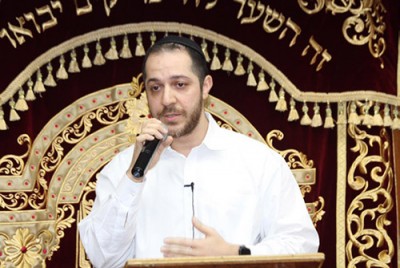 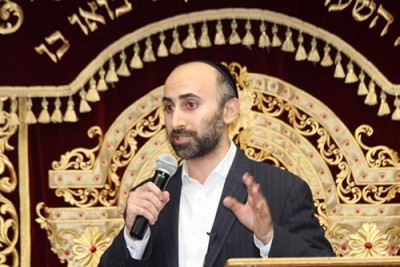 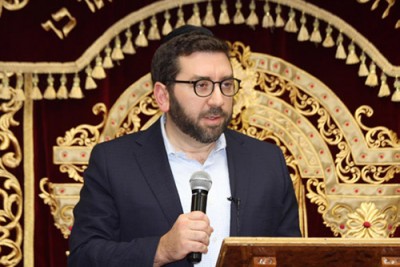 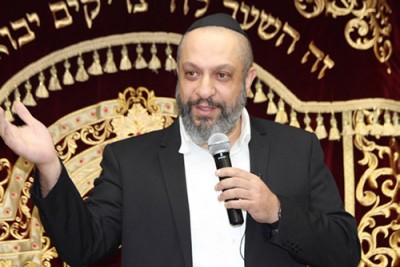 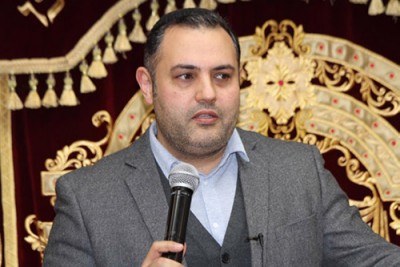 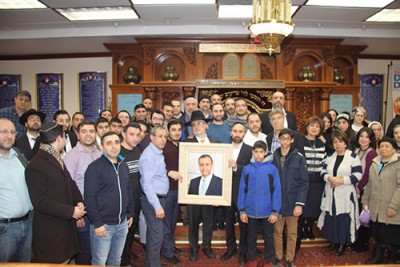 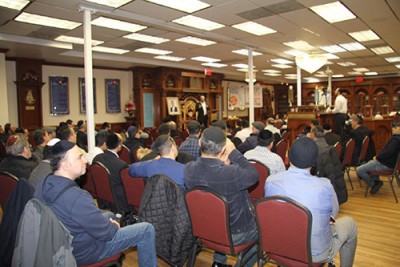 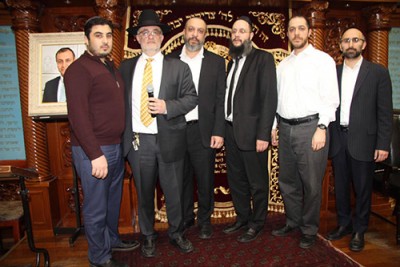 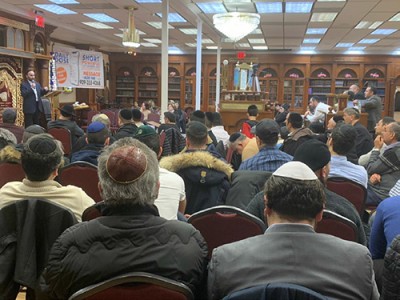 This past Sunday evening the Bukharian community gathered at Beth Gavriel Community Center to remember the life of Nissan Yakubov a”h who passed away in Israel at the age fifty last week, just six weeks after acute myloid leukemia returned following an extended remission. Impacted by various rabbanim, he was the definition of arichat yamim where he led “a true long life of days filled what appeared as years,” according to Emet Outreach director Rabbi Akiva Rutenberg. Nissan’s astonishment at the unbelievable depth of the Torah was remarked on by several of his friends and colleagues as he sought to discover reasons and excuses to be thankful and appreciative of everything in this world. Nissan was involved in the local kiruv movement and made his impact through comedy, joking and impersonating in a kosher method, bringing many new faces into the religious fold serving Hashem in purity. Early on, he was known to have performed before a thousand students at Forest Hills High School.

On his own journey to discovering his Jewish identity he would study books on Jewish thought at the Jewish nursing home where he worked. “He was searching for Hashem and did not even know it,” mentioned various speakers. Nissan had studied at Aish HaTorah in Yerushalayim under Rav Noach Weinberger. When asked at the conclusion of an initial presentation if his queries had been resolved, Nissan replied “I believe 102%.” Nissan was laser focused always seeking emet, the truth. This journey led him to becoming a respected researcher and professor of mathematics. He also developed a love for scripture following the teachings of Rav Tuvia Singer and Rav Nachman from Breslov, never taking anyone’s word for granted and always seeking out its source. Later in life he took a liking to the wisdom of the Zohar cultivating a love for nature, specifically the ocean as this brought him closest to our Creator.

Rabbi Israel Isthakov, Rav of Beth Gavriel’s Youth Minyan recalled how just twelve men and a couple of women spearheaded by Nissan formed the original shalom bayit lecture series at Beth Gavriel. Nissan taught his friends and colleagues “to be a good Jew and do what Hashem wants of us,” recalled Rabbi Isthakov.

The day after 9-11, Nissan led a program billed, The Twin Towers following the success of The Titanic where those in attendance discussed what they would do in the last moments of their lives and the legacy they hoped to leave. It was at one of these lectures that the Kolyakov brothers began what would one day become TorahAnytime, a yeshiva without walls. Shimon Kolyakov, the founder and director of TorahAnytime recalled how their families often spent Shabbat together and discussed the initial strategies for its website and features. Shimon was reminded that whenever Nissan gave a compliment, he had a talent to make a “big deal in the most genuine manner” and make those receiving a congratulations truly honored.

The first CHAZAQ dinner and subsequent Big Event showcased Nissan as the master of ceremonies. “It was remarkable to see someone stand before a massive crowd and be funny while intertwining inspirational stories into his speech,” noted Rav Ilan Meirov, director of CHAZAQ and coordinator of the 7am Youth Minyan at Beth Gavriel. Rav Meirov then related that shortly before his own wedding he sought a member of the Bukharian community proficient in English to act as the emcee. Nissan’s name arose leading to a long and dear friendship. “He knew how to put a smile on your face, and he would never let you feel bad for him even though you knew he was suffering tremendously.”

At the first Big CHAZAQ Event, Nissan made a shechiyanu aloud as he was simply amazed at so many community members gathering to hear lectures of Jewish thought. He could not believe how much Torah was displayed in a room once filled with immodesty.

Rav David Yosef shlit”a related to Rabbi Meirov on the night before Nissan passed “that life has challenges and is full of frustrations; sometimes we see the answer immediately and other times you must wait until you reach olam haba.”

Avraham and Isaac Abraham are another set of brothers who were touched by the life of Nissan. Isaac, the chairman of Chazaq’s board of directors, remarked on Nissan’s “magnetic personality” recalling him being a “man of integrity.” He revealed that when Nissan worked at Touro College’s 23rd Street campus he visited Baruch College and delivered an uplifting talk on the Hebrew language where he showed those in the crowd how to be real with G-d. Rabbi Akiva Rutenberg had attended that speech and later brought Nissan to other venues to spread his inspiration. Rabbi Rutenberg expressed how Nissan’s “essence was to make another person laugh and bring them joy.”

Rabbi Rutenberg then shed light onto Nissan’s pure character. He had been offered to do a test run at television’s Saturday Night Live and was even given his own show with a handsome salary of $25,000 an episode. Nissan developed a plan to make this career into a Kiddush Hashem. Rabbi Rutenberg related “the simcha on his face to have the ability to turn down the significant offer” because he sought daat torah from his rebbe, Rav Noach Weinberger. Nissan maintained the ability to be happy and spread this joy throughout life. When you live life ecstatic, your connection to Hashem is so much closer and you have the capability to “infuse more simcha in each mitzvah” even in moments of difficulty.

Ruben Kolyakov worked alongside Nissan as a computer technician in Touro College for six years starting in 2005. Ruben observed how Nissan was a pro at making events and united people. “It is very special to see the entire Beth Gavriel team together once again.” He explained how Nissan truly understood the breadth and depth of what it means to say “Baruch Hashem.” Ruben evoked a contagious element to Nissan’s cheerfulness, “if you want to always be happy, when you are upset, just lift up your eyebrows and look in the mirror,” was one comment Nissan often repeated.

Ephraim Mashkabov stated, “When I met Nissan, he had me at hello.” “It was a pleasure learning together with him and obtaining insight into how to make full use of your time in this world.”

Emanuel Isanov, another close friend associated Nissan with “someone of star quality that had all the talents to succeed in life making a daily routine into one of a higher level while being a genuinely happy and highly intelligent individual that touched the inside of people’s hearts and souls.” Emanuel painted a picture of Nissan being an untainted angel who embodied making purity of our way of life in this world with a wholesome mind and clean thoughts with unpolluted speech. “We have the purest connection to Hashem and should not be influenced by the ways of the Western world. We are the holy nation of Israel and must act as holy people even in the secret chambers of our lives with our friends, wives and children.”

Rabbi Emanuel Shimonov who has led the main minyan of Beth Gavriel for over two decades also spoke of Nissan’s exemplary character being a true eved of Hashem. Nissan certainly accomplished in one life what many cannot accomplish in many. An only child, Nissan immigrated to America at 3 years of age and lived to emulate his father, an injured veteran. He was interred on Yershalayim’s Har Hamenuchot and is survived by his wife Sarah and his six children. An online fundraiser has been launched to help his family through this trying time. Please visit thechesedfund.com/yakubovkids/for-future-of-the-nisan-yakubovs-kids to donate. To date nearly $36,000 has been raised.