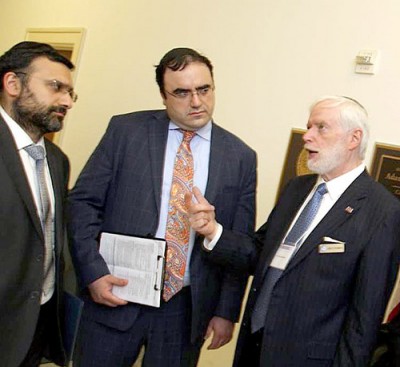 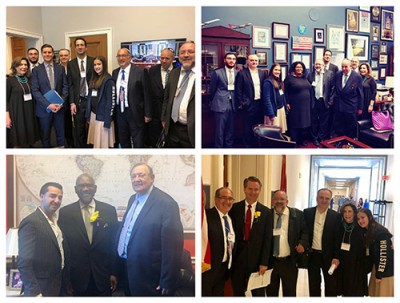 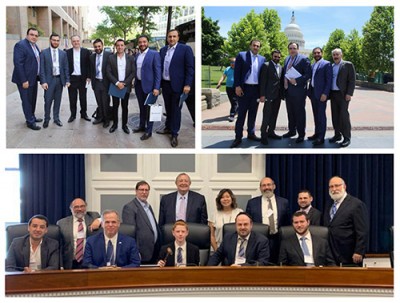 On May 21st, The Alliance of Bukharian Americans (ABA) represented the Bukharian community at NORPAC’s Annual and vital trip to the Capitol. NORPAC is a non-partisan Political A ction Committee (PAC) whose primary purpose is to support candidates and sitting members of the U.S. Senate and House of Representatives who demonstrate a genuine commitment to the strength, security, and survival of Israel. Because of the institutionalized turnover rate in Congress, efforts by NORPAC are critical in securing a strong U.S.-Israel relationship. The ABA is part of the global Jewish Community which strongly believes in this mission; we were very excited to take part this year.

Tuesday’s mission attendees in Queens arrived at the loading point 5:45 AM and were bused to Washington. We arrived at the Warner Theatre 11 AM for a brief plenary session with presentations by Congressional leadership. The Theatre was packed with approximately 1000 volunteers of all age groups and backgrounds! Afterwards, we split into smaller groups of 4 to 6 people and met with Members of Congress and their staff to discuss talking points regarding pressing legislation on U.S.-Israeli concerns.

This year’s message focused on several key aspects of the U.S.A.’s shared interest with Israel. We discussed the importance of keeping support for Israel Bi-Partisan. Both Democrats and Republicans share the fundamental common values which make Israel a natural partner with shared interests and values. We also asked members of the House and Senate to support bills which: appropriate vital security assistance; combat the anti-Semitic BDS movement; support sanctions against Hamas; and enhance U.S.-Israel Security and Economic Cooperation. Another cornerstone of the trip was underlining Iran’s destabilizing behavior on the global arena since the JCPOA was signed.

Historically speaking, NORPAC’s efforts have resulted in a strong U.S.-Israel relationship in Congress, guiding important pro-Israel policies emanating from Washington, D.C. It is today the largest pro-Israel PAC and has a well-earned reputation as one of the most effective PACs promoting the U.S.-Israel relationship. The ABA is honored in promoting a common goal commensurate with the Bukharian Jewish community.