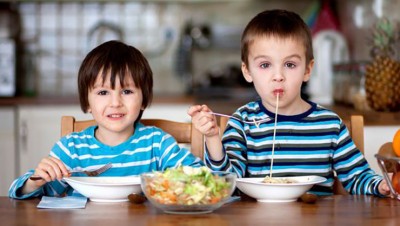 The obligation of Chinuch (education) requires a parent to intervene if his or her child eats non-kosher food, and to stop the child from eating the prohibited food. Likewise, it is forbidden for a parent to feed a child non-kosher food. More generally, a parent may not facilitate a child’s performing a forbidden action, even an action that is prohibited only Mi’de’rabbanan (by Rabbinic enactment, as opposed to Torah law). However, Hacham Ovadia Yosef ruled that although a parent may not feed his or her child non-kosher food, it is permissible to feed a child kosher food in a time where eating that food is not allowed. One example is feeding a child before he prays in the morning. Although the Kaf HaChaim ruled that this is forbidden, as parents must train their children to follow Halacha – and Halacha prohibits eating in the morning before praying Shacharit – Chacham Ovadia disagreed. Since the food is inherently permissible for consumption, and the problem lies only in the timing, and the prohibition to eat before praying is only Mi’de’rabbanan, there is room to allow feeding a child before he prays, even if the child has reached the age of Chinuch. Another example noted by Chacham Ovadia is giving a child food knowing that the child will not recite a Bracha. Once again, since the food is permissible, one may feed the child in such a case. Likewise, Chacham Ovadia writes that it is permissible to feed a child before Kiddush or Havdala on Shabbat, when eating is forbidden. Chacham Bension Abba Shaul adds that this is permissible until the child reaches the age of Mitzvah obligation (12 or 13). Chacham Ovadia also ruled that one may feed a child dairy food within six hours after the child ate meat. If the child has not yet reached the age of Chinuch, the child may be fed dairy immediately after eating meat, and if he has reached the age of Chinuch, Chacham Ovadia ruled, he may be fed dairy within an hour. Since it would be difficult for the child to wait six hours before eating dairy food, it suffices to wait just one hour. Chacham Ovadia also maintained that if one forgot to switch off the light in the refrigerator before Shabbat, he may allow a child to close the refrigerator door, even though this will have the effect of turning off the light.

Summary: It is forbidden to feed a child non-kosher food. However, one may feed a child before the child prays in the morning, or before Kiddush or Havdala on Shabbat, even though eating at these times is forbidden for an adult. One may also feed a child knowing that the child will not recite a Beracha. After a child ate meat, he may be given dairy foods already an hour later. (If the child has yet to reach the age of Halachic training, he may be fed dairy food immediately after eating meat.)