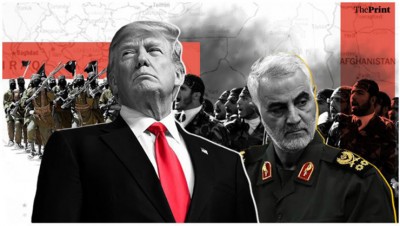 The world breathes a collective sigh of relief that 2020 is at an end.  It is superstitious, perhaps, to believe that when the clock chimes midnight on New Year’s, the problems of 2020 will be behind us. Nevertheless, the general public remains hopeful that 2021 will be better than its predecessor. However, as painful as 2020 was, this year saw one of the greatest accomplishments of the Trump presidency: the decimation of Iran as a regional power.

Most people probably forgot that in the waning days of 2019 and beginning of 2020, President Trump ordered a strike against Iranian General Qassem Soleimani in retaliation for a coordinated attack on the American embassy in Baghdad.  While the Democrats and their media talking heads were loudly condemning the strike, claiming it would lead to World War III, there was practically no retaliation, save a strike on an empty American base causing no casualties.

Soleimani was the number-two man in Iran, and his position was so important it would be the equivalent of combining the roles of Vice President, Secretary of State, and Secretary of Defense into one job.  Next to this good news is the ugly way that the media portrayed it.  Iran held massive, mandatory funeral services for Soleimani, which ABC’s Martha Raddatz referred to as “moving.” A New York Times reporter praised Iran for “showing more restraint” than Trump.

On “The View,” Chuck Schumer, with the prodding of the sycophantic “View” hosts, bashed Trump’s motives for conducting the attack. “[I] am totally unconvinced that there was any imminence that required an immediate attack.”  Joe Biden wrote in a statement that this was a “huge escalatory move” and it “tossed a stick of dynamite in a tinderbox.”  Even during the Vice-Presidential debate in October, Kamala Harris was still arguing the necessity of killing Soleimani, claiming that the minute retaliation showed that Trump didn’t care about American troops.  She must have forgotten that Soleimani was directly responsible for the deaths of countless American soldiers.

Another important and underreported assassination was the killing of Mohsen Fakhrizadeh, Iran’s top nuclear scientist.  While it was never confirmed, credit for the ingenious plot to take out this threat went to the Israelis.  Apparently, it took a dozen operatives within Iran to take out Fakhrizadeh, and the operation was so smooth that no agent was injured.  Anyone who ever worried about a nuclear Iran should have slept soundly that night.

Much like hatred of Trump, the Left also hates Israel.  Any anti-Iranian action is inevitably good for Israel, therefore it is reviled by those on the Left.  Former head of the CIA under President Obama and noted serial liar John Brennan made his disgust known.  He condemned the assassination, calling it a “criminal act,” “murder,” and “state-sponsored terrorism.” He then spoke directly to the Ayatollah, saying that Iran should “wait for the return of responsible American leadership on the global stage.” Nothing says “responsibility” like piling tens of billions of dollars onto a pallet and shipping it off to the largest state sponsor of global terrorism, as the Obama administration did.

The assassination was also condemned by the United Nations, the European Union, and The New York Times. Based on those condemnations alone, anyone can assume that it was the right thing to do.

Iran is also losing regional influence due to the Abraham Accords, which is one of the greatest accomplishments by not only President Trump, but any president in decades.  The Abraham Accords shone a light on the myth of the Palestinian Veto, and created a normalization of relations between Israel and multiple Arab Nations. So far, the United Arab Emirates, Bahrain, Sudan, and Morocco have signed on, with more nations on the way.

For years, the foreign “intelligence” community has claimed that what Trump accomplished was impossible.  Former Secretary of State John Kerry claimed in 2016 that “There will be no separate peace between Israel and the Arab world.” Kerry elaborated further, and what he said was so incredibly wrong that he should be laughed out of Washington.

“I want to make that very clear with all of you. I’ve heard several prominent politicians in Israel sometimes saying, ‘Well, the Arab world is in a different place now. We just have to reach out to them. We can work some things with the Arab world and we’ll deal with the Palestinians.’ No. No, no, and no.  I can tell you that, reaffirmed within the last week because I’ve talked to the leaders of the Arab community, there will be no advanced and separate peace with the Arab world without the Palestinian process and Palestinian peace. Everybody needs to understand that. That is a hard reality.”  However, since Kerry is a prominent Democrat, he remains in a high-ranking position in the upcoming Biden administration.

The signing of multiple peace deals is truly historic, and should earn President Trump the Nobel Peace Prize.  However, it was barely a blip in the news coverage.  Most of the coverage was about how the signing ceremony wasn’t concerned enough about COVID.  This Peace Deal, though, is essentially an alliance against an aggressive Iran.  In addition to sharing of technologies and embassies, the increased communication can and will lead to sharing of intelligence, which will help curb the ever-present threat Iran poses to the region.

One of the truly tragic parts about 2020 was that the media was so determined to get Trump out of office, they refused to cover his incredible accomplishments. While they lied to the American public, they pushed forward a man who helped make Iran a threat in the first place.  Early talks from the Biden transition show that he’s interested in re-entering the Iran Deal and lifting sanctions, which will give Iran even more power and contribute to the destabilization of the region.