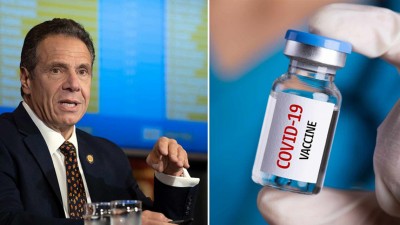 New York Times Bestselling author Governor Andrew Cuomo, who literally wrote the book on how to defeat Covid, is a blight on this once great state.  That’s it.  That’s the article.

Just in case more explanation is needed, Cuomo is completely botching the rollout of the Covid vaccine.  This is no surprise, as he botched the response to Covid in the first place.  According to the sycophantic media that praises his every move, he is the embodiment of leadership.  His daily press briefings have earned him an Emmy award and his aforementioned book is a best-seller.

His hypocrisy on the vaccine predates his incompetence on dispersing it to the public.  In September, he publicly sewed doubt and confusion about the efficacy and reliability of the yet-to-be-released vaccine, claiming that “Frankly, I’m not going to trust the federal government’s opinion, and I wouldn’t recommend it to New Yorkers, based on the federal government’s opinion.”  If it wasn’t obvious that this was a ploy to get more people to vote against President Trump, Cuomo spelled it out later.

When discussing the vaccine rollout in mid-November, Cuomo said that one of the main things they will have to combat is the large number of New Yorkers that are skeptical about receiving the shot.  What changed since his overt doubt in September?  The election happened, and the result was what Cuomo wanted, so now the vaccine can be trusted.  The FDA is the same, the CDC is the same and the President is the same, but now it wasn’t politically beneficial to be pessimistic about the vaccine.

Since the vaccine became available, New York has received almost 900,000 vials of the vaccine, yet distributed less than a third of that.  Cuomo’s “Phase 1A” prioritizes healthcare workers in conjunction with nursing home residents, despite the scientific evidence that age is a dominant factor in the severity of the virus.  The New York State government website describing the rollout does not mention any restrictions or prioritization. Compare this to states like Florida, with a larger overall and elderly population, which allows all residents age 65 or older to be eligible for the vaccine, not just those living in nursing homes.  Florida Governor Ron DeSantis trusts science in reality, not just as a platitude.

In Israel, vaccine distribution is exceeding expectations, with the State being the highest per capita rate in the world of administered doses.  This is due to a simple philosophy; no dose goes to waste.  If there are extra doses at the end of a day with no one to administer to, hospital workers go out to the street to pull people in.  That way no dose is wasted.

Cuomo, on the other hand, is signing executive orders which could fine hospitals up to $1 million if they administer a vaccine to someone who wasn’t in line.  This has resulted in vaccine doses that were not refrigerated and needed to be discarded.  After a holiday weekend of below average vaccinations, Cuomo threatened to fine hospitals up to $100,000 if they don’t speed up the process.  Cuomo’s response to every problem seems to be to collect money from hospitals.

If 2020 Cuomo was a problem, 2021 Cuomo could be a disaster.  According to recently proposed legislation, Cuomo could have the power to detain citizens without due process if that person is deemed a health threat.  New York State Assembly Bill A416, if enacted, would essentially allow Cuomo to declare that any communicable disease is enough justification to detain in a “medical facility or other appropriate facility or premises designated by the governor.”  This is a far cry from “15 days to slow the spread.”

The old parable of the frog in the boiling pot comes to mind when determining the course that New York has taken in the past year.  The pot is heating up, but New Yorkers continue to become accustomed to the temperature.  The boiling point is rapidly approaching, how many New Yorkers will hop out before it does, and what will happen to those that remain?