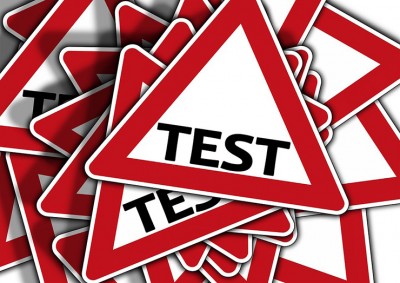 An older couple sat together on the train, quietly chatting as they rode through the countryside. Their peace was suddenly disturbed by a fully-grown boy sitting across from them. “Dad, look!” The boy exclaimed to his father. “Giant green trees are going past us!” The boy must have been almost twenty years old and had a huge smile glued to his face. His father smiled along, almost encouraging his outburst. The couple looked at the boy’s childish behavior with a pitiful glance, before going back to their conversation. Suddenly, the boy erupted with excitement again and shouted, “Dad, look at the clouds running along with us in the sky!”

At this point, the couple could not resist, and the wife went quietly over to the boy’s father. “Why don’t you take your son to a good doctor and get him some help?” she whispered kindly. The old man smiled and said, “As a matter of fact, I did. We are actually returning from the hospital right now. My son has been blind since birth, and today is the first time he is experiencing the gift of sight. Wouldn’t you be just as excited?”

As human beings, we have the remarkable ability to jump to conclusions, assuming that we know the truth of a situation when we have actually misjudged it completely. One of the most powerful learning experiences we can have is a paradigm shift- a shift in perspective that allows us to see something in a fundamentally different way.

Chazal (our Sages) tell us that Avraham faced ten tests along his spiritual journey (Pirkei Avot 5:3). While it is commonly assumed that Akeidat Yitzchak (the binding of Isaac) was Avraham’s tenth test, several commentators believe that the tenth test was actually after the Akedah. They suggest that Avraham’s tenth trial was the death of his wife, Sarah, and the subsequent episode of burying her in Ma’arat Hamachpeilah (The Cave of Machpeilah). This assertion is mysterious, as it seems that the command to sacrifice one’s own child would be the ultimate test, incomparable to the ordeal that followed. What, then, was the true nature of Avraham’s test of burying Sarah, and why is it viewed as so incredibly difficult?

On the most basic level, it appears as though Avraham was challenged with overcoming the grief of losing his wife, as well as dealing with Efron, a conniving, merciless cheat. There is, however, a deeper answer, one related to the power of paradigms. Perhaps Avraham’s test was a question of perception; a challenge to view Sarah’s death as an opportunity to grow rather than a reason to give up, a chance to build rather than fall apart. In this light, Sarah’s death was not the end, but the beginning. Let us explore this idea.

Chazal teach that marriage is eternal. Man and wife are created as one before birth; they are then torn apart and born individually, charged with the mission of connecting and recreating that oneness in this world. Man and wife are thus born into separate families, at different times and locations, and must then embark on the journey to find each other and reconnect as one. After a lifetime of building that oneness, man and wife remain eternally one in Olam Habah (The World to Come), enjoying the bond they created during this lifetime.

The Source of Marriage

This explains one of the unique sources for the laws of marriage. Mesechet Kiddushin, the tractate of marriage, details the various methods by which a man and woman can get married. One of them is through money (kesef), which is derived from the transaction between Avraham and Efron. The Gemara (Kiddushin 2a) draws a parallel between Avraham’s use of money in acquiring Ma’arat Hamachpeilah and man’s ability to use money to create a spiritual and Halachic connection to his wife, pointing out that both use the word “kicha” (take).

It seems strange, even ironic, to derive a source for marriage from a case in which a man’s wife dies. However, this is not ironic, nor is it a coincidence; it is a reflection of the deep truth that marriage is eternal. Through buying this plot of land, Avraham planted the seeds of his eternal marriage with Sarah; they would be buried together and remain bonded as one even after death. This explains another unique feature of Ma’aras Hamachpeilah.

The City of Chevron

Ma’aras Hamachpeilah is located in the city of Chevron, a word related to the concept of connection. The root of this word is chaver, the Hebrew word for friend or partner. Chevron is a place of connection, and it is where Avraham and Sarah are buried together, where they solidified their eternal connection.

It is interesting to note that the Torah repeatedly describes how Avraham purchased the plot of land in front of the entire town; this purchase was, in a sense, Avraham building an eternal marriage between himself and Sarah, and a wedding must be performed before a kehillah (public group of people).

Thus, we can see how Avraham’s tenth test was to perceive this as an opportunity to build, as opposed to an ordeal to pass over. This wasn’t simply Sarah’s death, it was the next stage of their eternal connection. This beautifully explains why the Torah records Avraham’s death specifically at the end of Parsha Chayei Sarah. Once he has built the foundation for their eternal connection, Avraham is able to join Sarah in the next world, married forever.

We can take this idea of eternal marriage even further. In Jewish law, there are two stages of the marriage process. The first step is kiddushin, followed by nesuin. Originally, the custom was to perform kiddushin a year before nesuin, leaving a full year until the marriage process was completed. Many Jewish thinkers ask about the purpose and relationship between kiddushin and nesuin. Why is there a two-step process of marriage?

While there are various reasons given, the Rambam explains that although kiddushin and nesuin are both fundamental to the process of marriage, they serve completely different functions. Kiddushin, the first step of marriage, is actually a “step back” in the relationship. It creates an issur (prohibition) between a man and his future wife, while also making them forbidden to anyone else. After this step back, nesuin is then “two steps forward”, creating a fundamentally stronger and more meaningful marriage, as the couple have just spent an entire year apart, longing for one another. This is a classic example of a “yeridah l’tzorech aliya”, a step down that enables a giant leap upwards.

Perhaps this is why we specifically learn the mitzvah of kiddushin, and not nesuin, from the episode of Avraham burying his wife. In a very deep way, Sarah’s death was the epitome of kiddushin. Her death created a painful, heartbreaking separation between Avraham and Sarah. However, this was only temporary. This “time apart” would soon be followed by nesuin, when Avraham would join her, completing their eternal marriage. At the end of Parsha Chayei Sarah, Avraham is niftar (passes away), buried next to his wife in Ma’aras Hamachpeilah, connected eternally.

The Maharal takes this idea one step further. He explains that all of techiyas ha’meitim (resurrection of the dead) will begin from Ma’aras Hamachpeilah. Why is this so? What is significant about this specific location? The Maharal explains that it is because Ma’aras Hamachpeilah serves as the root and model for the concept of eternal marriage. Man and wife are created as one before birth, and they must then recreate that oneness during this lifetime, remaining eternally one in Olam Habah (The World to Come). But there is one more step: they are then reborn into this world “as one” during techiyas ha’meisim. This is why the Hebrew word for “grave”, kever, is also the Hebrew word for “womb”. The grave is where we are buried, but it is also the place where we will be reborn at the end of days. In other words, we are like seeds planted in the ground, waiting to sprout.

Ma’aras Hamachpeilah is where Adam and Chava and all the Avot (Patriarchs) and Imaot (Matriarchs) are buried together. It is not holy because the Avot and Imaot are buried there; the Avot and Imaot were buried there because it is holy. Machpeilah comes from the word kefel- doubled. It was a doubled cave- it had two levels, representing the connection between the spiritual world and physical world. It was place where two people became one, where twoness became oneness. It is where all of marriage and oneness is planted, destined to ultimately be reborn during techiyas ha’meisim.

This was Avraham’s tenth and final test, a challenge of deepening his perception. While on the surface, Avraham was burying his wife, facing the death of his life’s partner, there was a deeper layer here. He was also planting the seeds for their eternal connection.

Truly seeing is not about what we see, it’s about how we see. This is the deep truth of perception; we choose how we see the world, how we experience life. Our paradigms can empower us, or cripple us. Our world view can inspire, or paralyze. The choice is solely up to us. This is the beauty, and potential tragedy, of perception. Avraham teaches us this lesson most powerfully when it comes to marriage. The connection we build in this world is not ephemeral or fleeting, it is infinite and eternal. Let us be inspired to walk in the footsteps of Avraham and Sarah, and build deeper and more empowering perceptions in life. Just like the boy who was suddenly given sight, each day we must choose to see with “new eyes,” recognizing that while yesterday we were blind, today, we can finally see.

Shmuel Reichman is an author, educator, speaker, and coach who has lectured internationally on topics of Torah, psychology, and leadership. He is the founder and CEO of Self-Mastery Academy, the transformative online self-development course that is based on the principles of high-performance psychology and Torah. After obtaining his Bachelors degree from Yeshiva University, he received his Masters degree in Jewish Thought from the Bernard Revel Graduate School, in addition to studying at Azrieli. He is currently finishing Semikha at RIETS while pursuing a PhD at the University of Chicago, and has also studied at Harvard through the Ivy Plus Exchange Scholar Program, completing graduate coursework there as part of his PhD. To find more inspirational lectures, videos, and articles from Shmuel, or to learn more about Self-Mastery Academy, visit his website: www.ShmuelReichman.com