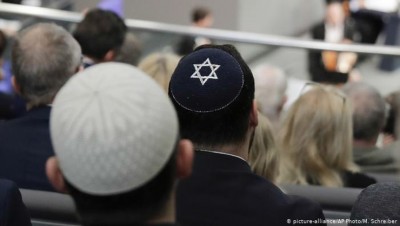 The Shulchan Aruch rules that a person must have his head covered when reciting a Bracha. Similarly, the Rambam writes that one must have his head covered when praying. Rav Moshe Feinstein wrote that if one prayed without a head covering, his prayer is considered a "Toeva" (abomination), since he prayed in a manner resembling members of other faiths. Even if one’s Kippa fell off without his knowing, and he then prayed with his head uncovered, his prayer is invalid, and he must repeat the prayer with a Kippa. Chacham Ovadia Yosef, however, disagreed. In a letter of approbation for the work Nesah Yosef (cited in Yalkut Yosef), Chacham Ovadia wrote that he felt that Rav Moshe Feinstein went too far, and one who mistakenly prayed without a Kippa certainly does not have to repeat the prayer. There is also a debate among the Poskim as to whether one may think words of Torah in his mind, without saying them, with his head uncovered. Some ruled that this is forbidden, but Chacham Ovadia Yosef writes in Yabia Omer (vol. 6) that this is, technically, allowed, since Halacha follows the opinion that thinking words in one’s mind is not Halachically equivalent to reciting them. Chacham Ovadia also ruled that one may answer "Amen" to a Bracha without wearing a Kippa, though quite obviously, one should try to ensure that he is wearing a Kippa when answering "Amen" and thinking words of Torah.

Summary: One is required to wear a Kippa when praying or reciting a Bracha, though one who mistakenly prayed or recited a Bracha without a Kippa – such as if it fell off without him realizing it – does not have to repeat the prayer or the Bracha. Strictly speaking, one does not need to wear a Kippa when thinking words of Torah, or when answering "Amen," but this is certainly preferable. One may say the English word "G-d" without a Kippa.