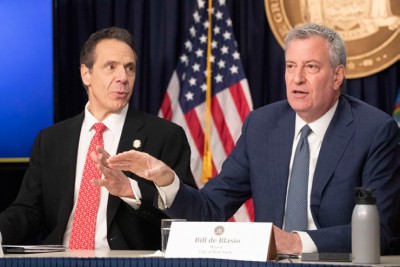 Ever since the worst mayor in New York City’s history came out with his plan to curtail the spread of COVID in several New York City neighborhoods, and the subsequent minor changes made by Governor Cuomo, one could not help but hear a lot of accusations and anti-Semitism against two of the highest-level lawmakers in the state. There have even been accusations of Nazism levied against the two.

Now, let’s make two things perfectly clear. Firstly, despite all of Bill de Blasio’s flaws, and believe me, I could fill this entire newspaper with his flaws, he is not a Nazi. Even more obviously, Andrew Cuomo is not a Nazi either. It’s sad that this must be stated these days, but I guess it does. Secondly, certain Jewish communities are not innocent in this rise of COVID positivity rates. Once again, I’m sorry this must be said, but the uptick in COVID is mostly happening in neighborhoods with a heavy frum presence.

Now, there could be a few reasons for this. There may easily be a false sense of security, since our communities were ravaged in the spring, and since there was no uptick in the summer, people feel that the worst is behind us. Our schools had opened, whereas public schools had not yet, so it was possible for spread to begin where others had not. We started going back to shul, which presents its own problems. But let’s be honest; the main reason that the spread is happening is that some people (not all – and that is a key) in certain communities are taking the situation far less seriously than they should be taking it. I was in one of the Brooklyn communities last week, where nobody on the crowded streets was masked, and even many people in stores weren’t masked. Social distancing isn’t enforced, which makes me wonder what happened over the past several yamim tovim in the shuls. In the Queens communities, I haven’t noticed as much of a disregard for these rules as I did in Brooklyn, but it definitely exists. Now, I could spend much more time on communities with an uptick, and we probably should. But I don’t live or spend enormous amounts of time in these communities, so I am not the correct person to do so.

What I think requires a deeper dive is the effect of the mandates of de Blasio and Cuomo. The fact remains that, whether or not you are adhering to social distancing and mask requirements, you are sick of the predicament we now find ourselves in. Nobody wants to adhere to these measures; we do so because we are scared, because we care about slowing the spread, or because we are forced to do so. But nobody is excited about wearing masks in public or not seeing other people for months at a time. We all inevitably have the thought of who to blame for this situation. Some will blame China. Some will blame President Trump. Some will blame G-d. But what the mayor and the governor have done here is give the excuse to people to blame the Jews.

Sure, the Jews may not have put us here, but they are the ones not taking it seriously, and are keeping us here. And while these two may not be anti-Semitic (key words “may not”), there certainly are anti-Semites living in New York. What do you think goes through their minds when they see that the mayor feels a need to impose extra restrictions in Jewish neighborhoods? Let me tell you, it’s not “leave the poor Jews alone.” Instead, it’s “those d—-ned Jews are ruining it for everyone.” So, while they are out there singling out Jews, they are messaging something far worse to others.

One could even take this a step further. For a media that constantly tries to link President Trump’s statements to him dog-whistling to certain hate groups, what could be a more obvious dog whistle coming from the two highest offices in New York State? In fact, back in 2018, Governor Cuomo’s top adviser, Melissa DeRosa, tweeted, “MAGA is a dog whistle.” If you think that telling the public that we need a return to the way things used to be is a dog whistle, what do you call telling people that a single population is potentially to blame for lockdowns?

And of course, it goes even further, because the areas that have been locked down aren’t the only neighborhoods that house large Orthodox Jewish populations. However, the average New Yorker does not even know the difference between a chasid and a Litvak; they certainly won’t be able to tell the difference between one who lives in Bensonhurst and one who lives in Sheepshead Bay. This is especially true when it comes to actual anti-Semites. They are the ultimate believers in “a Jew is a Jew.” And if they live in a community with a large Jewish presence, you could see a large uptick in racist attacks, just based on this information, regardless of whether those neighborhoods are currently locked down. Don’t forget, the largest number of anti-Semitic attacks in the country occurs in New York City, despite how much Bill de Blasio isn’t aware of them.

And do you know how I know that average New Yorkers don’t know the difference between Jewish sects? Because the government can’t even get it right. A few weeks ago, a van sent by either the mayor’s office or the governor’s office was sent around Kew Gardens Hills blasting messages to wear masks IN YIDDISH. In Kew Gardens Hills. Extremely few Jews in Queens speak Yiddish, and an almost miniscule amount of them speak it as their first language. This moronic move just goes to show how little effort went into improving the compliancy rate. How hard would it have been to look up the census data to see the languages spoken in communities? I can’t do it, because such information is blocked to the public for fear of hate crimes being committed in neighborhoods with high percentages of certain languages. But they could have. They could have picked up a phone and called a representative who would have told them what language to use. But no. To these government officials, we are all the same, and lumping everyone together shows just how little is understood about our communities.

And again, these politicians aren’t the next Hitler. But neo-Nazis are out there. Louis Farrakhan followers are out there. They can see the way the governor and (more historically) the mayor have treated the Jewish community, and decide to take matters into their own hands. And that’s why there should be anger directed at City Hall and Albany. Both de Blasio and Cuomo are out there trying to shove unscientifically provable implicit bias down our throats, but can’t understand that what they are doing heightens actual bias.