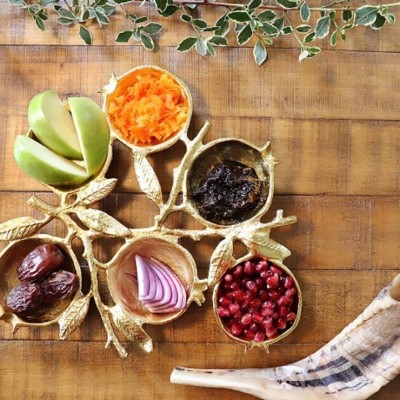 Different opinions exist among the Halachic authorities as the proper order of the Simanim – the special foods which we eat on the night of Rosh Hashana as symbols of our hopes for the new year. These different opinions can be seen in the different orders that appear in the various Machzorim. We will present here the view of the Ben Ish Chai, but it must be noted that the order is not critical; even if one eats the foods in a different sequence, he has nevertheless fulfilled the custom. The Ben Ish Hai rules that one begins with the date. One must check the fruit for insects, and then recite the Beracha of "Ha’etz," having in mind to cover all "Ha’etz" foods on the table. The "Yehi Ratzon" prayer should be recited only after one takes a bite of the food; otherwise, it would constitute a "Hefsek" (interruption) between the Bracha and the eating. One then eats any of the foods requiring "Ha’adama," having in mind to cover all foods on the table requiring "Ha’adama." At this point, one does not have to recite any more Brachot over the Simanim, as they have all been covered. One then eats the "Rubia," or, according to our community’s custom, the "Lubia." Those who follow this custom to eat "Lubia" should recite in the "Yehi Ratzon" prayer the word "She’telabebenu." One then eats the "Karti" (which resembles a large onion), followed by the Swiss chard, gourd, pomegranate and then apple. The apples are followed by the sheep’s head or fish head (depending on custom). In our "Yehi Ratzon" prayers on Rosh Hashana, we use three different expressions in praying that our enemies will be eliminated: "Yitamu," "Yikaretu," and "Yistaleku." The Ben Ish Hai explains that these three prayers refer to three different kinds of enemies. The prayer, "Yitamu Oyebenu" refers to enemy nations who threaten the Jewish People; "Yikaretu Oyebenu" refers to the harmful spiritual forces which come into existence as a result of our sins; and "Yistaleku Oyebenu" refers to the "Mekatregim" – the angels that prosecute against us before the Heavenly Tribunal. One should try to have this in mind as he recites the various prayers. The Kaf Hachaim writes that if somebody is unable to eat one of the Simanim, such as if it was not available, he does not like the taste, or he is concerned that it might contain insects, then he should look at the food and recite the "Yehi Ratzon" prayer. The concept of Simanim relates not to the actual eating of the food, but rather to using the food as a symbol of our hopes and prayers for the coming year, and therefore one may recite the prayer even without eating the food.