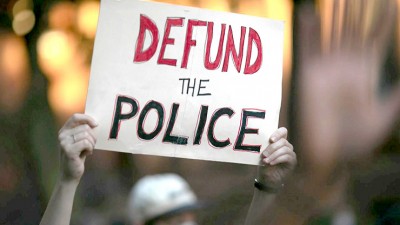 The sweeping nationwide “Defund the Police” movement hit the streets of New York City over the last couple of weeks and has left many confused and angry, as many argue that hardworking and law-abiding citizens will ultimately suffer if cities opt to decrease the presence of law enforcement. There are radicals who support this undertaking and are attempting to take over neighborhood policing. In Minneapolis, a veto-proof majority of the city council has said they will dismantle their police department. It is concerning, to say the least, but what does it mean for us and the NYPD?

Before jumping to conclusions and worst-case scenarios, it makes sense to take a look at what exactly is meant by defunding a police department. It goes without saying that this term is degrading to those sworn to uphold the law, perhaps similar to what anti-Semitic remarks are to the Jewish population. Protesters continue to take to the streets, rallying for justice for George Floyd, the man killed at the hands of a Minneapolis police officer. Some, both Black and White, have masqueraded as part of this cause and brought attention as they looted hundreds of businesses throughout the city, wrecking streets and livelihoods by filling up their hands and bags with anything they could grab and making away like a pack of lunatics. The police department is not being reformed to allow anarchy and chaos to reign, although it seems the NYPD is aware where the raiders originated.

On Monday evening, June 8, on a Zoom video conference with Jewish community leaders, Council Member Donovan Richards of the 31st district and a leading candidate for the Queens Borough President’s office, clarified the overall concept championed by many protestors for abolishing the NYPD. “Safety and security remain on high regard for our city and our communities,” explained the council member. “The NYPD budget is heavily bloated and a nuanced way of looking at the situation might be calling for a re-imagined 21st-century police force.” The council member then pointed out a persistent oversaturation of police officers seeking overtime hours alongside astronomical figures paid out for police abuse. The city has created a $9 billion crater for itself that has led Mayor Bill de Blasio to demand each agency shave off seven percent of its budget. The NYPD has long had the second largest budget, $6 billion, just behind the Department of Education, and still only opted to cut a mere one percent off its numbers, just $16.3 million. Police overtime often falls into play, with June-time parades and baseball season, to the tune of roughly $25 million. With coronavirus nixing this programming, it brings one to question why the NYPD did not honor the Mayor’s request and opt to cut further. “As the NYC Council’s Chair of the Committee on Public Safety, I have not put out a call for layoff in the NYPD; your precincts will still be manned and have the same number of people,” stated Richards. The council member then pointed out other areas where a conversation can be had to reassign continued NYPD involvement to community organizations: youth services, mental health services, and school safety agents, among others.

Elizabeth Crowley, a former council member from the 30th district, and another principal Queens Borough President contender, on a Sunday evening Zoom call with our Jewish community leaders, took a stance against the opportunists on city streets. “We need to have enough police officers available to stop individuals from throwing bricks or Molotov cocktails at police officers,” explained Crowley. “The curfews made sense and government officials should have enforced social distancing measures more at the protests.” Council Member Kalman Yeger of district 44 covers much of Boro Park, Brooklyn and notes a reoccurring issue in the Public Safety Committee chaired by Council Member Donovan Richards, also a candidate for Queens Borough President. Over the past two years two bills have languished in this committee and most probably will never get their chance to go before the Council for a vote. Brooklyn’s 48th district Council Member Chaim Deutsch that serves much of Midwood prepared a bill that expanded on Yeger’s predecessor former Council Member David Greenfield’s school security program. The program would allow to lower the threshold to allow nonpublic schools, like yeshivas, to be reimbursed for unarmed guards. It would provide for a school with possibly 200 students to be eligible for a reimbursement. This bill remains at the public safety committee and never even got a hearing. Yeger himself introduced a house of worship security act that has similarly failed to reach a hearing at the public safety committee. Following a public shooting at an American synagogue there became a need for houses of worship to require either an armed or unarmed guard.

“To not even give these bills a fair hearing, displays a shocking lack of concern for protecting our community,” stated Yeger. The Council Member also noted how he had never witnessed the chair of the public safety committee speak up against anti-Semitism at the Council. “I have served in City Council for nearly 2 years; I have never heard him raise his voice to combat anti-Semitism.” The mailings sent out from the Richards for New York campaign explicitly state that Council Member Richards has fought back against hate and anti-Semitism. Yeger notes that Richards may have made these statements prior to his joining the Council but explained that when he spoke out in recent months when Jews were under attack, Richards remained silent.When calls for profound changes to the policing system surfaced, the Bukharian Jewish Link sought to hear the opinions from those most affected in our neighborhoods.

A group of local yeshiva teachers on a Zoom call discussing graduation ideas were questioned about their feelings of safety and security when the dust of the protestors and the fears of coronavirus settle. A couple of teachers overwhelmingly hailed decisions over the last year to increase school security protocols. “I feel relaxed knowing that our institution is not reliant on the New York Police Department to ensure the safety of our students,” stated a 40-something-year-old teacher. Another educator was quick to note that the local police was responsible for the various crossing guards but admitted that the interaction was quite limited with these agents.

A similar phone conference of the appointed team to ensure the security of a local shul was conducted to understand the ramifications of drastic changes to our local police department. With the uptick of anti-Semitism this past year, this shul had recently hired an armed guard to protect its entranceway. “Moving forward, we must ensure that a guard is part of our annual budget. This is not going to be a one-off experiment that we do away with,” mentioned a senior advisor on the panel.

Local police departments have taken a liking to our community and the involvement of its leaders and families; but across the city, videos abound of NYPD officers kicking religious park goers out from public areas. A group of Kew Gardens Hills parents, angered by the continued closure of City parks, were reluctant to “break in.” Some understood that the playgrounds had been closed as they could potentially become breeding grounds for the spread of coronavirus, but others saw things very differently. “The government has turned our local parks into a new Area 51,” grunted one local mom. “A few of us decided to close off our street for children to bike ride and enjoy the outdoors. We had grown-ups standing on each end and the local police that passed by did not seem to mind.” The community-run pilot program seemed successful, and the parents hoped to organize its continued use with more sunny days on the horizon.

Next, we talked to a member of a homegrown safety organization piling his family into their minivan. “I fear for my family to even play on our lawn; a radical can appear and severely torment our lives,” the man explained as they prepared to head to an open parkland somewhere on Long Island. Other neighborhood residents have taken advantage of their newfound free time and headed to their upstate residences for extended periods in the hope of isolating their families from the surge of violence and depressing news. “Seeing Shalom Pharmacy boarded up scared my wife immensely and brought forth questions from our children that we opted not to answer. Going to the Catskills feels like we are escaping the fears of hostility, yet we are presented with families lax on social distancing and uncertainty surrounding the prolonged pandemic,” noted one Queens Resident.

A doctor at a local hospital I spoke to made light of the possibility of police reform. “I am quite certain that our local 107th and 112th NYPD precincts will remain staffed, especially considering the anti-Semitism scares of the last year. I am more worried if our healthcare system will be prepared for a second round of COVID-19 in the fall,” declared the physician, reluctant to share his name.

Several store owners, sought for comment on the effects of a newly conceived police force, noted simply that they have increased their in-store security surveillance, installed some outdoor lighting, and remain ever so vigilant. “Over the years I have called the police over shoplifting and saw other shop owners dial 911 for gang-like fighting on premises. The response time was decent, and their help was invaluable. We cannot lose these measures in our community,” concluded one alarmed shopkeeper, opting not to share his business’ name for fear of unwanted attention.

It is no secret that we find ourselves in a time of crisis and must seek out allies. Some may turn to the 1960 images of Jews marching together with Blacks hoping to ensure justice through civil rights. We pursue leaders of conviction who are pragmatic and are able to use kindred relationships to establish new paths that bring to question a divestment from NYPD resources.