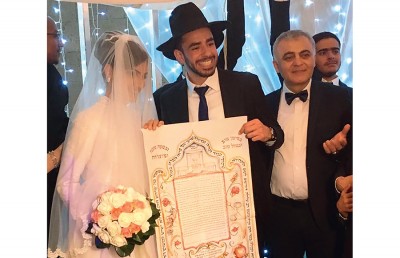 On Thursday, March 1, at about 6 a.m., there was a packed crowd with over 120 men in attendance at the third-floor Netz minyan in Beth Gavriel.  It was a beautiful scene to see how many families who have moved to neighboring towns of Fresh Meadows, Jamaica Estates, Hollis Hills, Flushing, and so on, came back home to Beth Gavriel to participate in the annual Netz minyan Megillah reading, which followed by hot, fresh delicious Plof breakfast with bread, red wine, and salad.  The minyan got so big that we had to go to the larger second floor room in order to accommodate all the people. It was so nice to see the dozens who came from other communities to join the community where they grew up, where they took on Judaism, where they got married, and where most of them had their first children. Beth Gavriel has been a starting point for many in our large community, including myself.  Although we have to grow and sometimes move on, it was inspirational to see that we don’t forget our roots. Overall, Beth Gavriel had over 15 Megillah readings throughout Purim. Men, women, and children came from all over Queens to hear the readings, which were done every hour of the day.

Speaking of Beth Gavriel families, there was a family who was here several years ago named the Munarov family.  As many do, they came from Israel thinking that they would be able to have financial success here because it was difficult in Israel.  Yakov Munarov had a large family with many boys and girls. He worked hard in many fields, but it was difficult for him to get on his feet.  Because the family settled in Forest Hills and were close to the Beth Gavriel Center, they began to become more religious. They saw themselves practicing Judaism more than they did in the Holy Land.  It happens to many Israelis; they become more religious living in the United States than in Israel itself.

Yakov tried many ventures but for some reason they were not working out so well.  As Yakov started to get a hold of one of his business undertakings by borrowing money and building a small jewelry store, all of a sudden his store blew up and burned down.  Luckily, he came out with just some scratches and bruises. That day he not only lost what he had, but he also lost what he borrowed. Things were not working out for him. However the Beth Gavriel family was standing by his side, helping him with whatever he needed–whether it was financial, moral, or physical.  We all pushed him to go back to Israel, but he was always unsure of how things will turn out. We tried to help him with many different options until finally he made the decision to go back to Israel. All the signs were showing that Hashem wanted him to go back. Baruch Hashem, as I am writing this message on Monday afternoon March 5, Yakov Munarov is marrying off his son Yair to Diana Yagudayev.  My son, who is in Israel for a year in Yeshiva, was at the wedding and he FaceTimed me with the Munarov family. Yakov wanted to tell the entire Beth Gavriel family that he is very thankful for all that we did, and for standing by his side when he needed us most.

Many times we are faced with many different challenges.  We have to look outside the box and realize that Hashem is trying to talk to us.  Just as the miracles were happening in the Megillah, Hashem performs miracles for us on a daily basis. But many times we do not immediately see the signs and have to be wearing the right glasses in order to see these wonders. They don’t have to be big, like water splitting or mountains moving.  For us, a miracle is when we get a spot at a time when it’s almost impossible to get a parking spot. We have to look at all the little things that Hashem does for us; if we do, we will ultimately see big miracles happening on a daily basis.  Until next time.