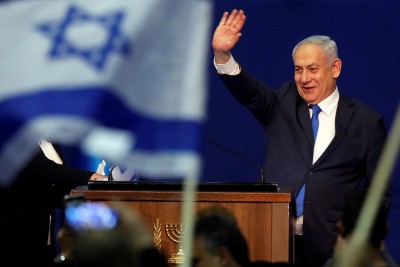 Instead of apathy, citizens sought to end the ongoing political stalemate and went to the polls in numbers unseen since the 1999 election. “We plowed the country from north to south. There is nothing like the citizens of Israel. Israeli citizens trust us because they know that we have brought the best decade in Israeli history,” Netanyahu said at his victory celebration at Expo Tel Aviv around 2:20 a.m. Tuesday morning Israel time. “This has been the biggest win of my life,” the Prime Minister added. Many had already dismissed the notion of Netanyahu retaining power. The hope remains for a nationalist government to be formed allowing the State of Israel to recover from three torturous elections in just one year. In his victory speech, Netanyahu pledged to quell the Iranian nuclear threat, pursue a defense option with America and restore peace with moderate Arab entities, while pushing for deeper economic reforms. Afterward, the prime minister spent time stressing the need to annex the settlements of the West Bank.

Following a day of fluctuating results, the prime minister’s right-wing  and religious party bloc is expected to win 35 or 36 seats, as the results are being counted, fluttering on the verge of establishing a blocking majority of 61 seats  to form the next government, with Gantz’s party receiving 32 seats. Gloom and despair filled the Blue and White headquarters at their loss settled. Likud’s coalition partner Shas is expected to receive 9 to 10 seats, and the other partners, United Torah Judaism and Naftali Bennett’s Yamina Party, each is expected to win 6-7 seats, this calculates to be 59 – two seats short for a majority.

The wild card in this race, secularist nationalist Avigdor Liberman, would receive seven seats, promising not to sit in the coalition unless his demands for drafting chareidim and relinquishing religious regulations are met. The Joint List of Arab parties grew to 15 or 16 seats, resulting from higher turnout of Arab voters. Although Israel’s Arab parties never participated in any previous governing coalitions, their pickup of a seat in the Knesset gives them more visibility in expressing grievances against the government.

Netanyahu’s victory may be hollow, as his criminal trial begins on Tuesday, March 17, but it puts his party in a position to lead Israel, with or without Bibi. “The nation had its say,” said Likud MK Miri Regev. “[It was] a referendum that proved the trust of the people in Netanyahu and in the Likud, with all the indictments and all the attempts to depose Netanyahu.”

President Reuvan Rivlin and Netanyahu are destined to spar over the mandate to form the next government. The president made no guarantee he would give Bibi the opportunity to form a government. Likud sources are hopeful for Netanyahu to form a government as soon as possible aiming to complete the process prior to the corruption trial. Rivlin intends to take the opposite approach to the April and September elections and instead push off giving the mandate until the last moment; the same date the trial is set to commence. First, the president will await finalized election results and only then meet the various factions to consult on a recommendation to form a government. Central Elections Committee leader, Supreme Court Judge Neal Hendel, will deliver the final election findings this upcoming Tuesday.

“The consultations ahead of the granting of a mandate to form a government on a candidate will happen after the results will be clear, official and final,” the President’s Residence released in a prepared statement.

Another option exists for Rivlin to not award any candidate a mandate to form a government if he realizes that neither Netanyahu nor Blue and White leader Benny Gantz can garner a clear, 61 majority.

The president may instead opt to give the mandate straight to the Knesset floor, kicking off a 21-day timeframe for anyone to launch a government.

Netanyahu took no chances and speedily convened his bloc of right-wing parties at the Knesset to start the process of forming a new governing coalition. A decision was reached not to rule out adding other parties, obviously except the Joint List.

Netanyahu spent over an hour and a half on Tuesday morning with Shas leader Arye Deri and United Torah Judaism minister Moshe Gafni. Gafni speculated that a new government would not include the Blue and White or Yisrael Beytenu parties.

A final option is being weighed for who has opened communications with four possible defectors from parties to Likud’s left. Right-wing ministers on Blue and White include MK Zvi Hauser, MK Omer Yankelevich and MK Yoaz Hendel.

Gantz cautioned against anticipating the outcome of the race before final votes are counted. “Netanyahu does not have 61 votes to form a government,” he said. “We will consider our path.”

Shas chairman and Interior Minister Aryeh Deri proclaimed before his activists, “Shas is concluding a year of election campaigns with an increase of over 100,000 new votes who returned home.”